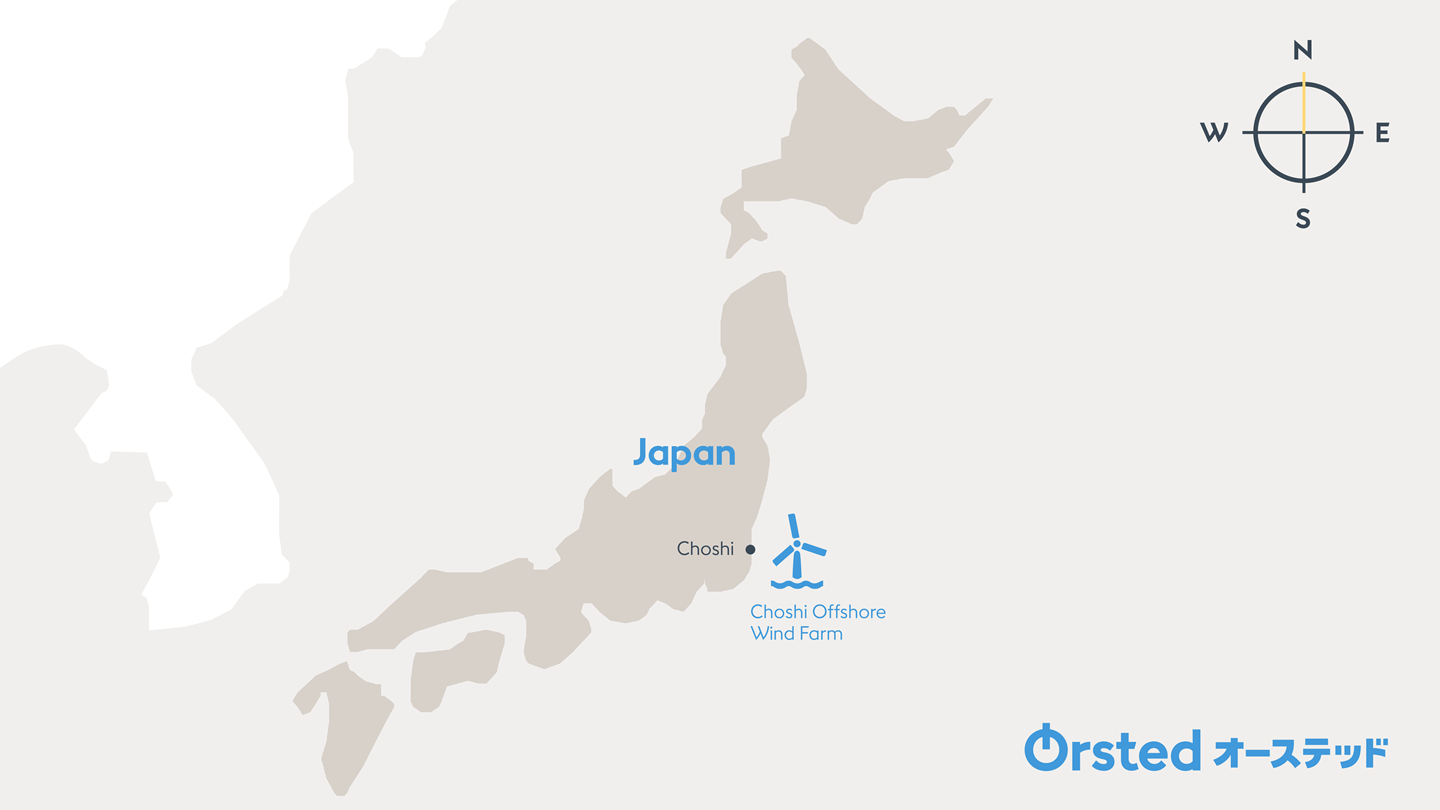 TEPCO RP has been conducting site-specific surveys and tests since 2009 on offshore wind power generation off the coast of Choshi City, Chiba Prefecture, which was designated as a promotional area under the Renewable Energy Sea Area Utilization Law enforced July 21, 2020. As part of the Choshi demo project TEPCO RP has experienced construction and O&M under harsh marine and weather conditions, while considering the surrounding environment and coexistence with the fishing industry in and around the designated area.

Ørsted, as a partner, is bringing a strong track record of developing, building, operating and decommissioning offshore wind farms across the globe, with key experiences in Taiwan where there are similar extreme environmental conditions. Having established an office in Tokyo in 2019, Ørsted, together with TEPCO RP, have engaged early and extensively with local communities in Choshi City, Chiba Prefecture, to seek consensus on the proposed offshore wind project.

Shinsuke INOUE, Managing Director of the Wind Power Business, says, “With the cooperation of the local community, we started Japan’s first bottom-fixed offshore project in 2009, and today we are able to provide you with electricity generated from that windfarm. Along with Ørsted, which has a plethora of experience with offshore wind farms, TEPCO has created a plan of offshore wind power generation that encapsulates the preferences of the regional communities and the knowledge from both companies to the greatest extent possible.Our plan embodies our corporate philosophy of, “Harnessing the Natural Resources to Energy, and further to Society” and will contribute greatly to Japan’s 2050 Carbon Neutral Declaration.”

Matthias Bausenwein, President of Asia-Pacific at Ørsted, says, “Today, we are delighted to confirm that, together with TEPCO RP, we have submitted a joint bid for the Choshi Offshore Wind Farm project to the Government of Japan. The unique plan for Choshi Offshore Wind Promotional Area, tailored to the unique conditions of the site, whilst considering the sensitivities and preferences of local stakeholders, demonstrates our capability to assist the Government’s offshore wind ambition of up to 45GW by 2040.  We highly value our strategic partnership with TEPCO RP working to deliver for Japan’s first offshore wind auction round, and we are determined to provide continued assurance in the delivery of much needed clean energy for Japan. We would like to thank everyone involved in the project to date and for the productive discussions, feedback and comments that have helped shape and refine our proposals. ”

Fuyuhiko Nishimura, Representative Director of Choshi Offshore Wind Farm KK, says, “We believe that by having this plan approved and putting our all into maintaining this equipment over the 30-year occupation period, we will not only contribute to increasing the use of renewable energies in Japan, but also contribute to improving the lives of the regional residents from whom we have received such vast support.”

Jun Kasamatsu, Ørsted Japan Country Manager, continues, “It has been a great pleasure collaborating with TEPCO RP as we participate in Japan’s first round bid of offshore wind. We believe we have submitted a very attractive and comprehensive proposition that fully brings the best of the two companies in order to realize the most stable, efficient, and long term reliable project that will bring great economic contribution to the local community, and act as a strong foundation to build a wealth of offshore wind experience in Japan. We look forward to the opportunity to further integrating local businesses and important voices in the community in the realization of Choshi offshore wind project, as well as ensuring Japan’s offshore wind success through our collective strength and contribute to building and achieving a sustainable decarbonized society to Japan. ”

In January 2019, TEPCO and Ørsted signed a memorandum of understanding on the collaboration of the Choshi Wind Farm Project by utilizing both companies’ knowledge and experiences, which was further matured by signing a Joint Development Agreement in March 2020. As part of the bid submission, the partnership has included a clear business plan, minimizing risk by focusing on deliverability with competitive pricing and high business feasibilities.

Should this partnership be awarded the bid, TEPCO RP and Ørsted will aim to ensure a successful project is delivered on time, within the budget, and established a solid foundation for the future offshore wind industry in Japan. This partnership in the Choshi area would allow for greater levels of understanding and opportunities, and deepening ties with local stakeholders and other related parties. We look forward to creating a new power generation business and contribute to the realization of carbon-neutral society and the growth of local industry.